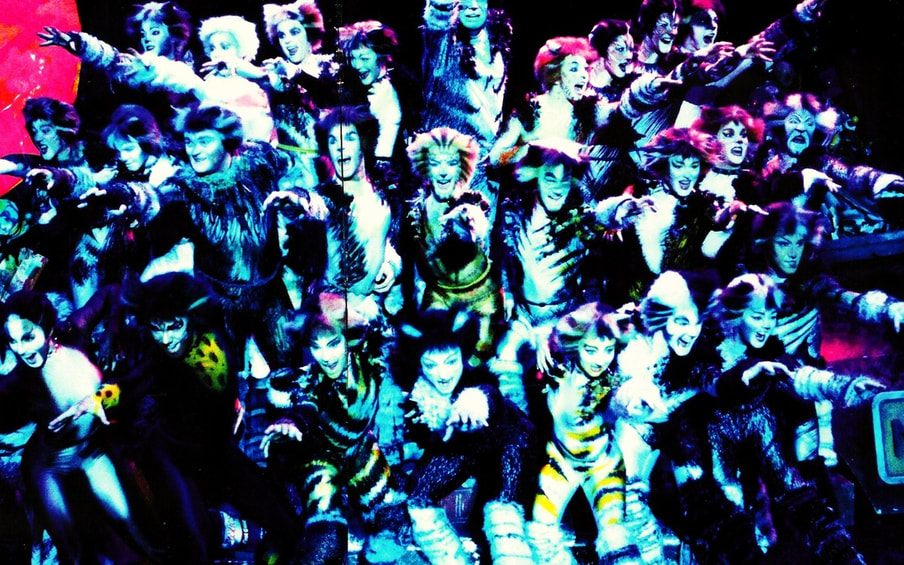 It’s just that I feel so sad these wonderful nights. I sort of feel they’re never coming again, and I’m not really getting all I could out of them.
-  F. Scott Fitzgerald, This Side of Paradise

It had never really occurred to me that the people who put on the performances of my favourite show could possibly just walk out of the theatre every night as if they were mere mortals. I had never asked to go to stage door, didn't even know such a thing existed - at age ten, it had absolutely blown my mind that I could write to these people, so the idea of ever meeting or interacting with them was clearly something beyond my wildest imaginations when I was younger and, maybe because of how Cats always takes me back to that feeling from when I was six and saw it for the first time, I had never really thought to adjust my idea of how the world of theatre worked. That was until the 2006 tour of Cats. I had already seen them perform once in Llandudno and had been so overwhelmed by it that I had sat crying happily in the pub back at our B&B after the show, so naturally when it came to visit my home city of Stoke-on-Trent I just had to go, and I even dragged my friend along for the ride. We had one of the best nights ever - and we had clearly enjoyed it so very much that my dad - in a moment I wonder if he had sometimes since regretted! - asked if I would like to go to stage door after the show to have our programmes signed. I think my eyes almost fell out of my head. "We can do that?!" That first night we had NO idea what we were doing, hardly any idea who we were even talking to most of the time. But we laughed so much, got such a kick out of being able to tell the cast how much we had enjoyed the show and actually kind of enjoyed the challenge of trying to work out who was who from the programme. The problem was? It made that theatre magic feeling last that little bit longer, and made it all the more difficult to let that feeling go after it was all over. So, what did we do? Naturally we begged to go to more performances! At first just in Stoke but then we discovered how many other theatres were reasonably accessible to us and we just simply counldn't resist the thought of seeing more shows. And every performance we woudl go back to the stage door. And the pattern continued again and again...! 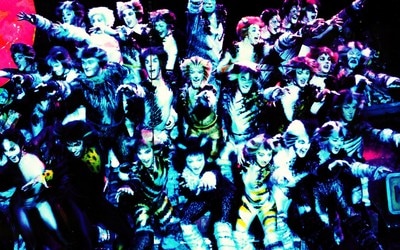 The cast who started my love of the wonderful world of the stage door. 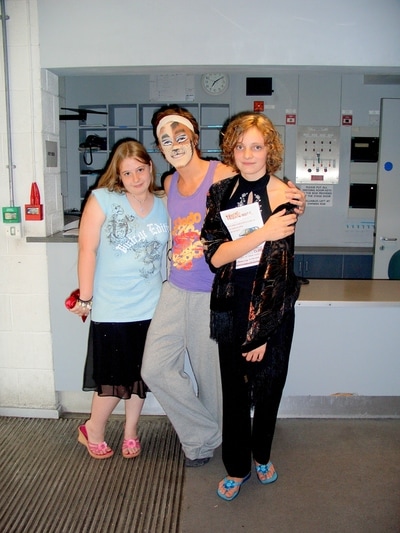 A pre-show visit to my favourite: Kevin McGuire, partially made up as Carbucketty. He ignored the fifteen minute call for this which made us laugh. 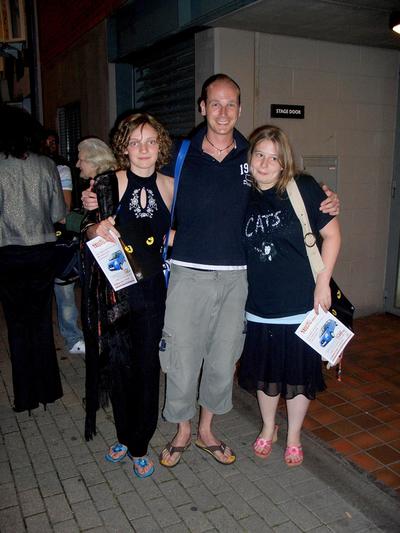 Our hero: Dean 'The Voice' Maynard. Funny, kind and actually looks like his headshot! 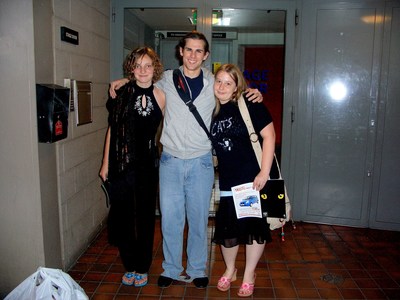 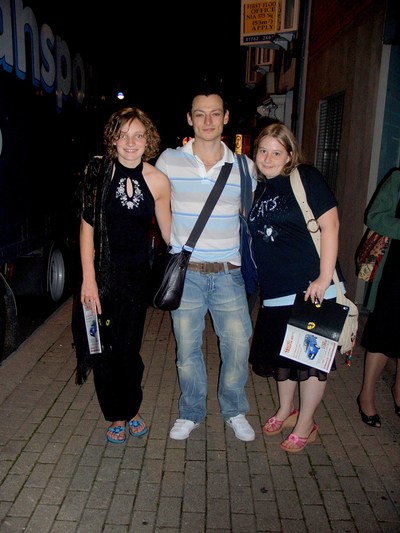 Trevor Schoonraad on the night I never lived down with my friend: I accidentally stabbed his bag with my pen in the excitement! 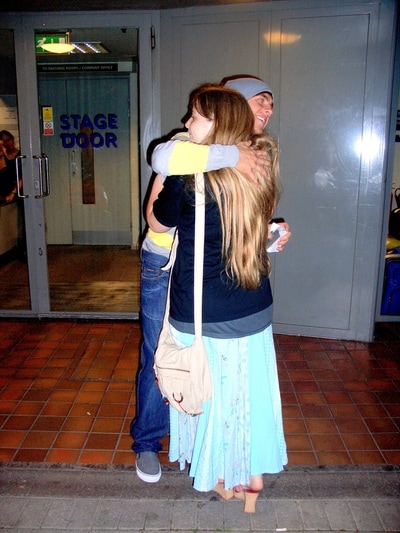 A hug goodbye: the last night of the 2006 tour in Stoke, and we were convinced we wouldn't be seeing these people again. Oh, how wrong we were...
Sadly I remember so little of the actual show we saw that started it all. We didn't write everything down, and to this day I don't write as much down as I should; a terrible admission for a writer, I suppose, but the thing is you ALWAYS think it's impossible to forget these details as they seem so large and vivid in your mind at the time. What I do remember is being completely awed by how much background action was going on, and just how good that cast were at it; I do remember that Carbucketty was playing with Coricopat's tail in Bustopher Jones whilst Skimbleshanks stroked Bill Bailey's head, for example. One thing that always impressed me about the 2006 cast's take on the show was just how good they were at the comedy. Dean Maynard as Munkustrap orchestrated the comedy of The Awful Battle of the Pekes and the Pollicles perfectly every show and the rest of them played the chaos breaking out around his exasperation just right. It was madness; Skimbleshanks taking out the Pekes in a different way every show (threatening to hang them, shoot them, shoot them with arrows...and many more!), Admetus and Asparagus nearly knocking Munkustrap over as they came in late for their cue, Tugger getting bolder and bolder in his mocking of Munkustrap, Demeter trying to march with the Pollicles then making a grope for Munkustrap (Not kidding, that actually happened!) and then Peter Tyler's eccentrically incompetent Alonzo/Rumpus Cat playing off Dean's frustrated Munkustrap was pure comedy gold every time.
I have some slightly less vague memories of that first stage door, although the overriding thing I remember is not having a clue what we were doing! The trickiest part of starting your stage dooring career with a production of Cats? You don't get to see what the people in the show actually look like and - as my friend and I discovered - people don't always look exactly like the headshot provided in the programme! This meant that when we hurried round to stage door after seeing Cats at the Regent together for the first time, we were totally and utterly lost and confused. From what I recall, we actually spoke to a lot of the cast and got their autographs, but for the most part we hadn't a clue who it was we were talking to. I had a conversation with the lovely Lorraine Graham (Jennyanydots) about my bracelet breaking from me clapping so much, spoke to Trevor Schoonraad (Quaxo/Mistoffelees) about my love of the show, the video production and the impression he made on me in Llandudno (Mistoffelees has always been one of my favourite characters) and I had a similar conversation with the charming Gary Watson (Rum Tum Tugger.) I can't remember much of what we talked about with John McManus (Skimbleshanks) that first night, other than our obvious enthusiasm for the show, but I do know we didn't realise until after he'd left that he was Skimbleshanks aka Liz's favourite character! Much hilarity ensued after that discovery. As for my own favourite character and cast member? Kevin McGuire played Carbucketty and he started out the same way he finished up; the last person out of the door! He was so sweet to me, probably just because he was happy I knew who Carbucketty even was, and he assured me that I hadn't imagined the fact that he was smiling at me in The Ad-Dressing Of Cats - much to my glee, of course!

Liz and I had already written fan letters to the cast - which I had delivered to stage door when I went to the box office, getting a hug from Carbucketty in the process, although he was the only one who got his letter in person and he put the others on the noticeboard for me. On the second time we went back, we only saw Kevin McGuire before the show, but he asked where we were sitting and as a result, all through the show he was smiling at us and coming our way and it was so nice to know we'd made him feel appreciated and in turn he was making us feel appreciated too.
One time we were delivering a pre-show gift of scones and John was leaning out of a window, already in his Skimbleshanks get-up, whilst Kevin was standing outside side door, talking with some friends, with only his make-up done (the contrast between our two favourites was another long-term joke for us!) John spotted us and called down 'Hello girls! Back again?!' and I replied 'We've got a present for you!', holding up the package of scones we'd made for him. 'Do you want me to come down?' he asked and we nodded enthusiastically and - in super-fast time - he made it downstairs to us to come and chat. He invited Liz just inside stage door, as he didn't want to stand out in the street in his cat get-up ('I feel like an idiot [turns to random passers-by] Yes, I am half-cat!'), so I took that chance to go over to Kevin and give him his share of the scones. His friends were all 'Aw, you have a fan!' and then he asked where we were sitting that night and once more promised to look out for us. Word must have spread after that because sure enough, during the show, we got a fair bit of fuss. John - as Skimbleshanks - ruffled my hair at the opening of Act Two and several of the others patted us on the head.
Going back to stage door that night we did nothing but gush and squeal and I have no idea what the cast must have made of us! Most of them remembered us from the other night we'd been, especially Dean, who I seem to remember teased us a fair bit for being back already, a tradition which continued at every stage door I ever saw him at. And so, little did we realise it, but an adventure had begun. We had a lot to learn about the ins and outs of stage door, and about the tour; we picked up a lot of tips along the way and we definitely had a way to go before we got stage dooring down to the fine art I like to think I practice today! But we had no idea about that, or about cast changes or future shows. In fact, we thought we would only meet that cast one more time in a pre-planned trip to Sunderland. But it turned out we couldn't have been more wrong: we would soon be spending an awful lot more time at the Cats stage door, officially bitten by the theatre bug and in love with the world of the tour!
Return To My Adventures